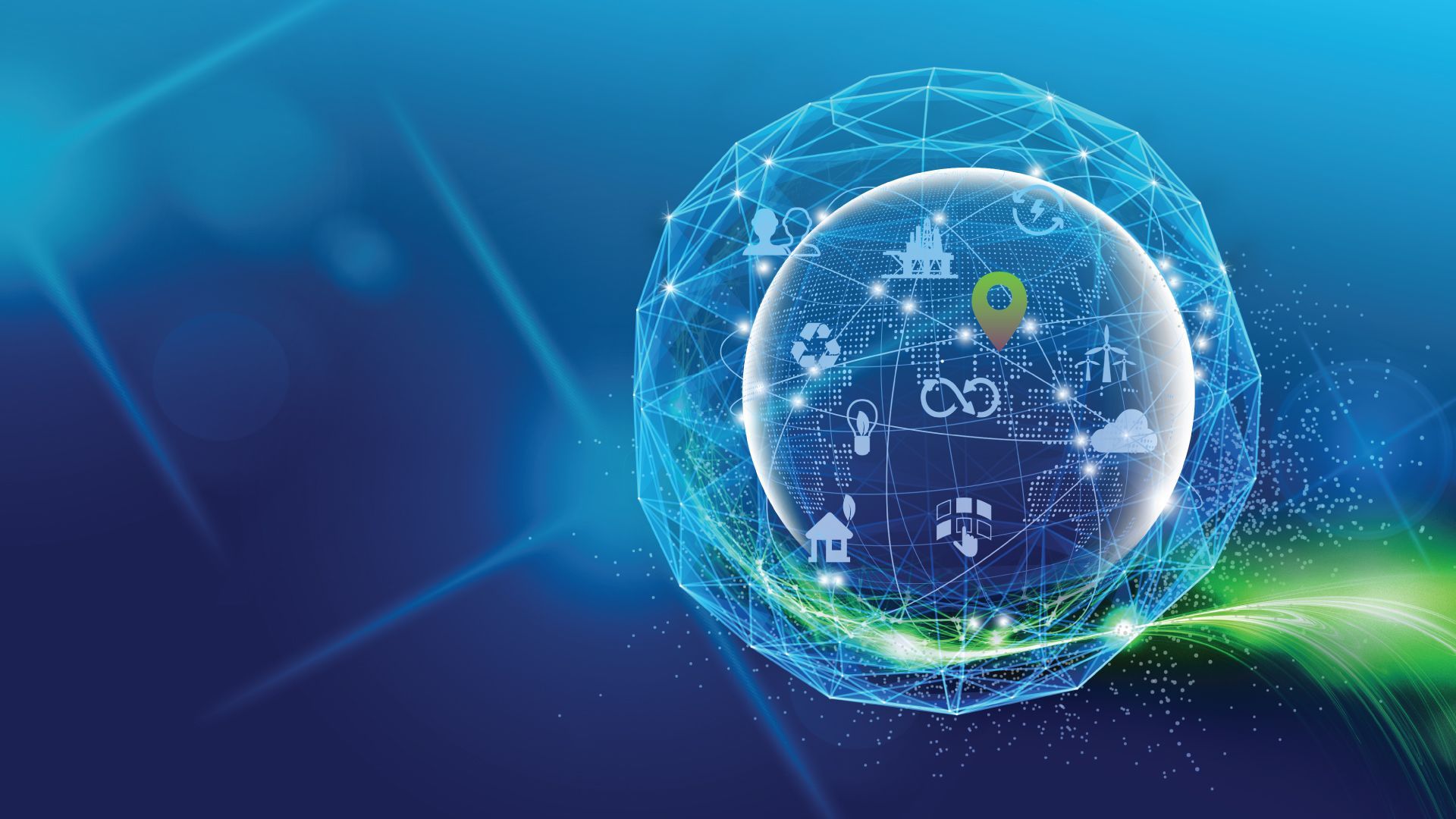 As the upstream oil and gas industry moves towards increasingly complex and capital intensive projects, we must challenge our conventional practices. It is critical that lessons are shared from successfully integrated projects that embody excellence. The IPTC committees and sponsoring societies believe in highlighting projects above USD 500 million that have demonstrated distinction throughout the entire exploration and production value chain.

The IPTC Excellence in Project Integration Award is given to a project that adds value to the industry and exemplified strong teamwork, solid geoscience knowledge, reservoir and production engineering acumen, determined and watchful construction, and outstanding facilities engineering practices. Equally important, a successful project requires a pervasive culture of HSE, and a positive impact on the communities it affects.

Nominations are no longer being accepted. The receipient of the IPTC Excellence in Project Integration Award will be announced at the IPTC 2023 Opening Ceremony & Award Presentation scheduled on Wednesday, 1 March 2023. The Egina project is the largest FPSO to date in the TotalEnergies SE Fleet of FPSOs and the first deep-water project in Nigeria after the 2010 Nigerian Oil and Gas Industry Development Content Act. The project provided connections between different companies, more than 48 million person-hours worked in Nigeria, fabrication of more than 60,000 tons of equipment in Nigeria and the advancement of drilling technologies leading to greater oil production in ultra-deep waters of 1,400 to 1,700 meters.

The reservoir and drilling advancements implemented during the project are expected to benefit future offshore developments in the area of reservoir drilling. 200 Nigerian students were trained, which will create room for excellent career opportunities. A conscious effort was made to purchase local goods, employ Nigerian citizens, and develop local infrastructure. In addition to contributing to oil production, the Egina project has positively impacted the Nigerian economy. Fadhili integrated gas processing plant is located onshore and lies 60 Km west of Jubail seaport in the Arabian Gulf. It is the newest of 3 best in class gas processing facilities developed by Saudi Aramco that demonstrates an outstanding commitment to safe utilization of technologies, efficient monetization of assets and prompt project execution through an excellent capital management program. The facility processes a total of 2.5 BSCFD of raw Sour gas, 2.0 BSCFD from an offshore gas field and 500 MMSCFD of low BTU sour gas from an onshore gas facility through a complex subsea gas gathering networks. The processed low BTU gas provides 1.5 GW to the national electricity grid alongside sales gas to the national gas grid. FGP integrated development commenced in 2016 and put on stream in 2020. The facility development and execution were completed in a record-breaking time of less than 5 years with zero loss time injury. 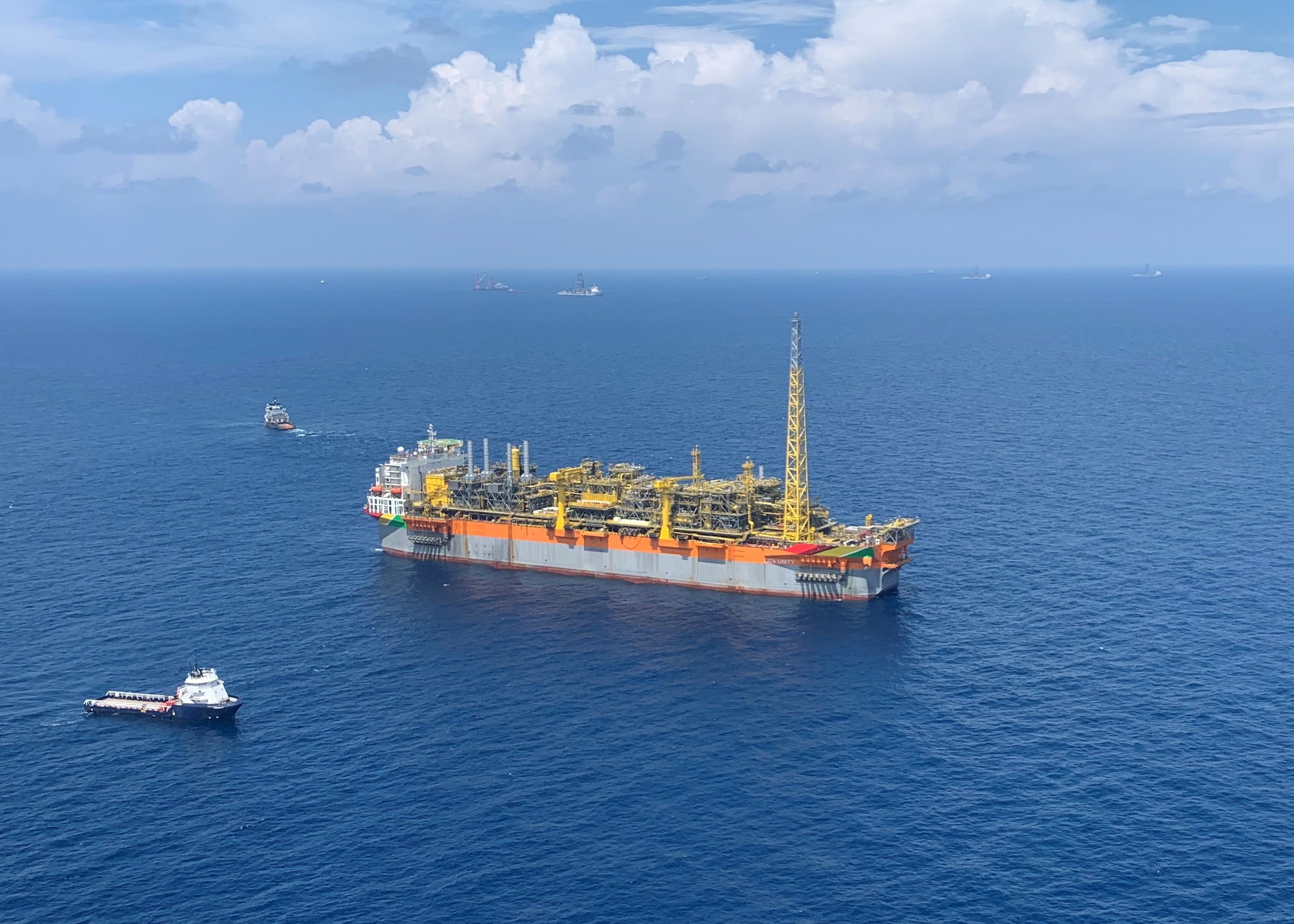 Liza Phase 1 and 2 by ExxonMobil

In May 2015, the Liza-1 exploration well discovered oil offshore Guyana in the Stabroek block.  In less than 5 years, December 2019, the Liza Phase 1 Project began production from Liza Destiny Floating, Production, Storage and Offloading (FPSO) vessel, one of the fastest projects from discovery to first oil of its type in the industry.  In May 2019, Liza Phase 2 was funded, less than two years after final investment decision (FID) for Liza Phase 1.  Liza Phase 2 began production from Liza Unity FPSO in February 2022.  There were challenges along the way, from a new country entry into a frontier basin, to the restrictive metaocean conditions, to a global pandemic.  The Liza development deployed new technologies and novel execution approaches to meet these challenges.  Integration across all aspects of the projects was key to this achievement, with the concept of One Team embedded into team behaviors.

Only completed project above USD500 million are to be considered. Projects must be completed (first or incremental gas or oil production) in the past 5 years and six months from the scheduled conference date (i.e. qualification period is 28 February 2017 to 28 August 2022). Project nominations will remain active for future IPTC events, until the project nomination no longer matches the qualification period. 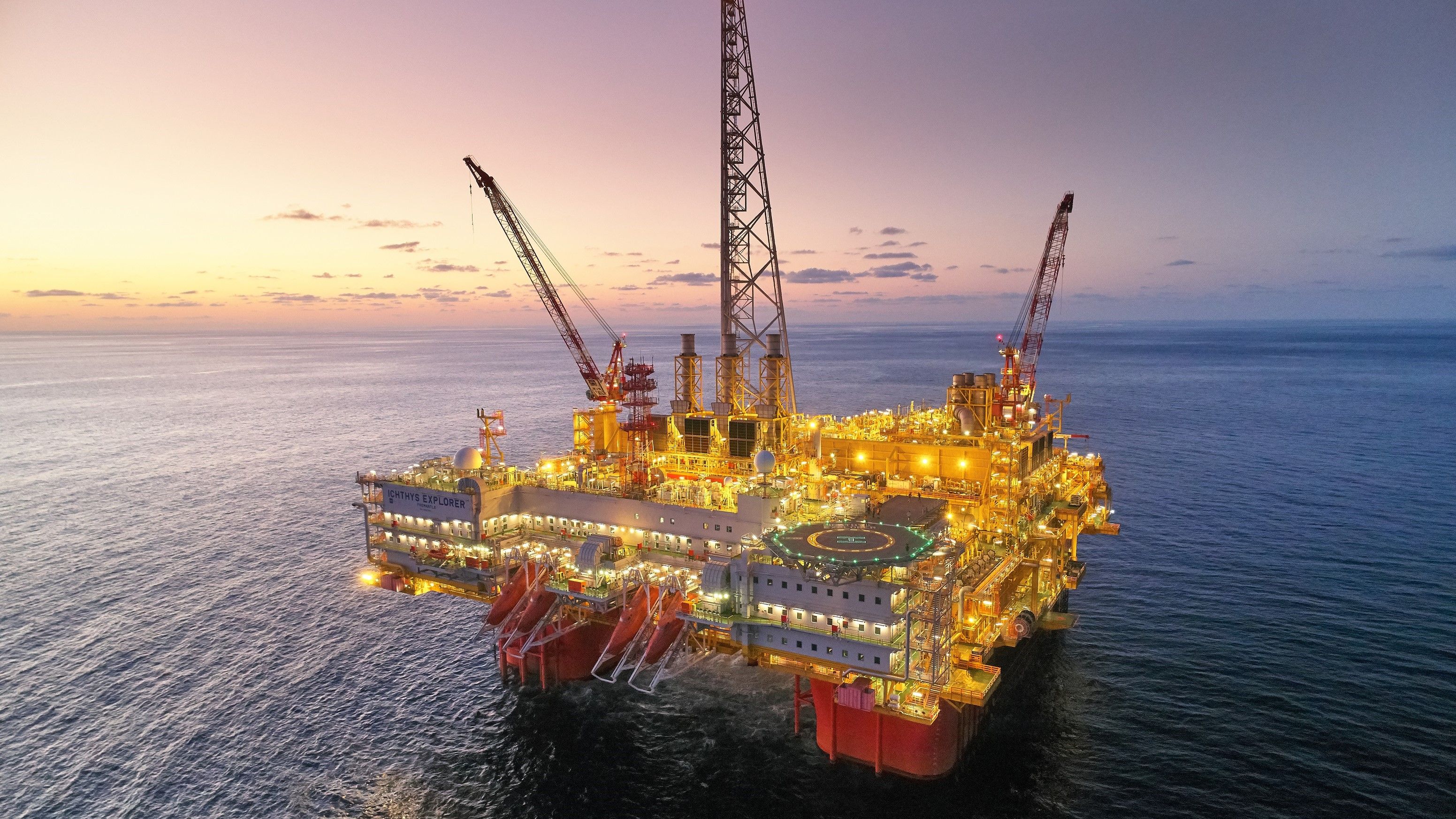 Recipient of the 13th IPTC Excellence in Project Integration Award

Ichthys LNG is ranked among the most significant oil and gas projects in the world. The energy development is a joint venture between INPEX group companies (the Operator), major partner Total, and the Australian subsidiaries of CPC Corporation Taiwan, Tokyo Gas, Osaka Gas, Kansai Electric Power, JERA and Toho Gas.

A Final Investment Decision for Ichthys LNG was reached in 2012 and production commenced in July 2018.

It is one of the few energy projects worldwide to incorporate the whole chain of development and production: subsea, offshore, pipeline and onshore.

Gas and condensate from the Ichthys Field will be exported to onshore facilities for processing near Darwin via an 890-kilometre pipeline. Most condensate is directly shipped to global markets from a floating production, storage and offloading facility permanently moored near the Ichthys Field in the Browse Basin.

Recipient of the 12th IPTC Excellence in Project Integration Award

The Novoportovskoye oil and gas condensate field is one of the first hydrocarbon fields discovered on the Yamal Peninsula. The fact that Novoportovskoye contains significant oil and gas reserves was proven back in 1964, yet the absence of transport infrastructure as well as the complex geology have long remained insurmountable obstacles to start developing it on a full-field basis.

Since 2012, the Project Operator has been a Gazprom Neft subsidiary (Gazpromneft Yamal LLC).

After the Arctic Gate offshore terminal was put into operation, oil transportation is year-round. To service the Project, CPY has created its own tanker fleet. Oil is delivered to consumers via the Northern Sea Route by tankers escorted by icebreakers.

The field moved into full-field development in 2016. Currently, the field is being actively drilled and is reaching its peak oil production. 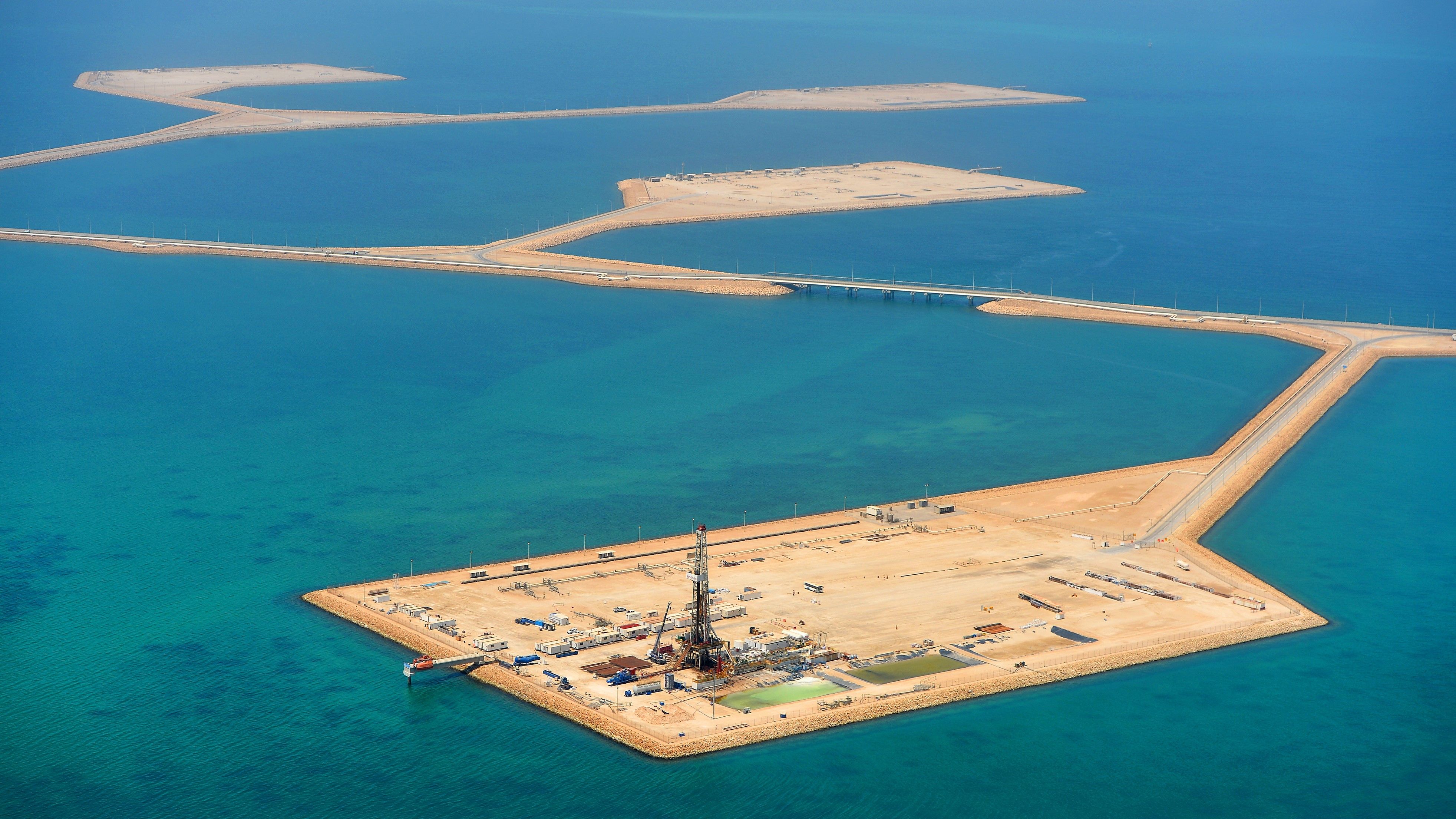 Recipient of the 11th IPTC Excellence in Project Integration Award

Off the North East Coast of Saudi Arabia lies one of the world’s biggest oilfields called Manifa. Hidden beneath the surface of Manifa is a delicate habitat of sea grass and coral reef. The development of Manifa field by preserving fragile marine environment has been one of the biggest engineering projects in history. In a ground breaking design, 27 man-made islands were constructed connected with 41 km of causeway.  Over 4 million man hours were spent on the detailed design phase alone. Extended reach wells were drilled to tap into reserves at extreme distances from wells on the surface. Production targets were achieved ahead of schedule without compromising safety or the environment. With the successful development of Manifa, Saudi Arabia’s position as the world’s premier oil producer is ensured well into the future and some of the Kingdom’s most precious habitat has been preserved for generations to come. 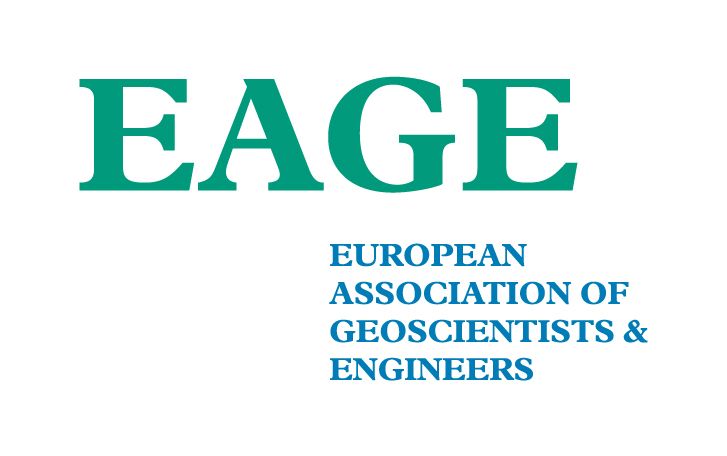